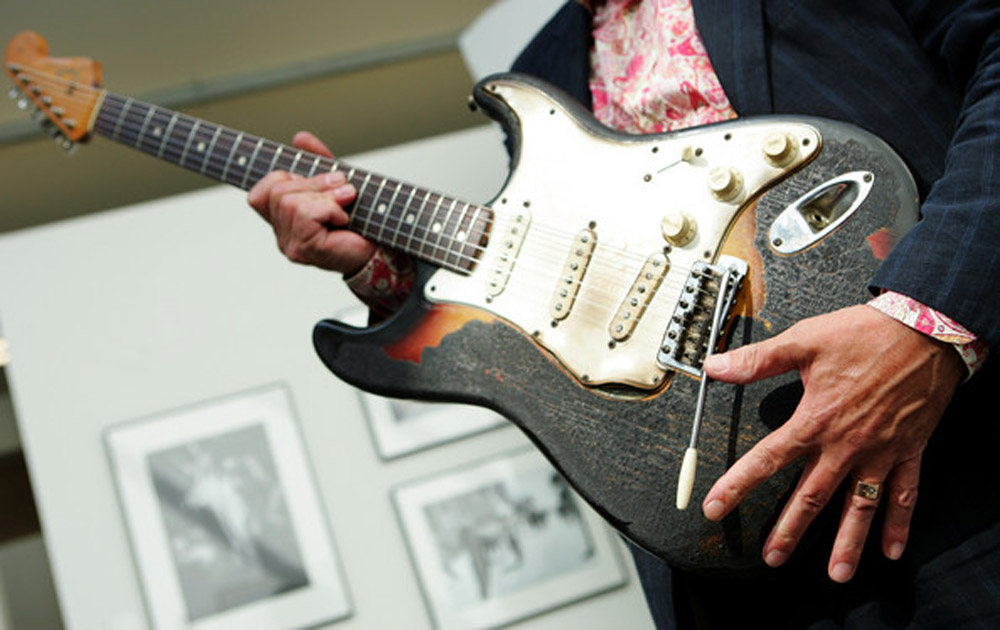 This was the first guitar that Jimi Hendrix set on fire on stage, whilst playing the Finsbury Astoria in London, England on 31st March 1967. (He actually only ever burned two guitars, the other being at the Monterey Pop Festival). The remains of the burned Astoria guitar were collected by Hendrix’s press secretary Tony Garland who put them in storage at his parent’s garage in Hove and forgot about them. Forty years later in 2007, Garland’s nephew unearthed the instrument and it was put up for auction in London in 2008. The Astoria 1965 Fender Stratocaster sold for $560,000 to American collector Daniel Boucher who said: “It changed music, he raised the bar so high you couldn’t get over it. I am going to play it, I hope some of it rubs off on me.”

This 1939 vintage acoustic guitar made by historic American manufacturer Martin, was the main instrument used by Eric Clapton during the filming of his MTV Unplugged concert on 16th January 1992. Clapton performed the show in front of a small audience at Bray Film Studios in England and the subsequent album release included the song Tears in Heaven and a reworked acoustic version of Layla. The Unplugged album won three Grammy Awards in 1993 and sold over 26 million copies worldwide. In 2004 the Martin 1939 acoustic sold for $791,500 and set a world record price for an acoustic guitar with the proceeds donated to Clapton’s Crossroads Centre charity, a drug and alcohol residential rehabilitation facility.

John Lennon Lyrics for Give peace a Chance

John Lennon recorded Give Peace a Chance with Yoko Ono in June 1969 in room 1742 at the Queen Elizabeth Hotel in Montreal during John & Yoko’s “bed-in” for world peace. The song was recorded using a basic setup of four microphones and featured vocals from many of the journalists and celebrities who visited John & Yoko. The lyric sheet was given by Lennon to the then teenager Gail Renard who had managed to sneak past hotel security and into the hotel room. Lennon gave Renard the lyrics on a large cue card for the singalong and she stated: “He kept on saying, ‘These things are going to be worth something someday. Have them.’” The lyrics were sold by auction at Christies in London for $833,653 on 10th July 2008. 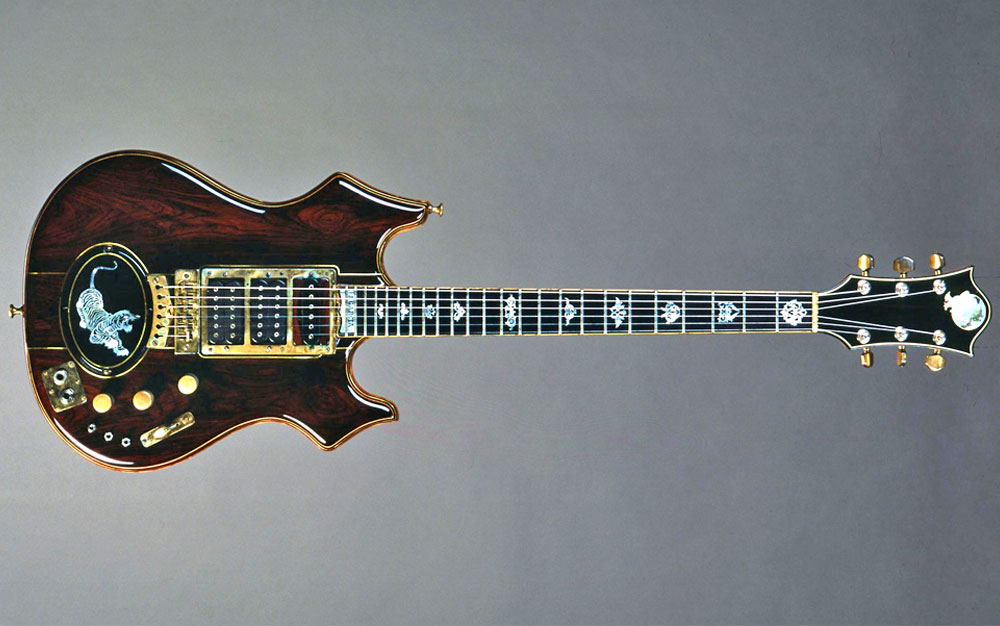 The Tiger, built by American luthier Doug Irwin, was Jerry Garcia’s main guitar from 1979 to 1989 and the last he played publicly with the Grateful Dead at Chicago’s Soldier Field concert on 9th July 1995. It was named after the tiger inlaid on the guitar’s top behind the tailpiece and the combination of several heavy varieties of wood, plus solid brass hardware resulted in an unusually heavy instrument weighing in at over 6kg. Garcia, who died in 1995, left the guitar in his will to Irwin who in turn put the instrument up for auction at New York’s Guernsey auction house in 2002. The Tiger guitar sold for $957,000 and was purchased by guitar collector and owner of the Indianapolis Colts, Jim Irsay. 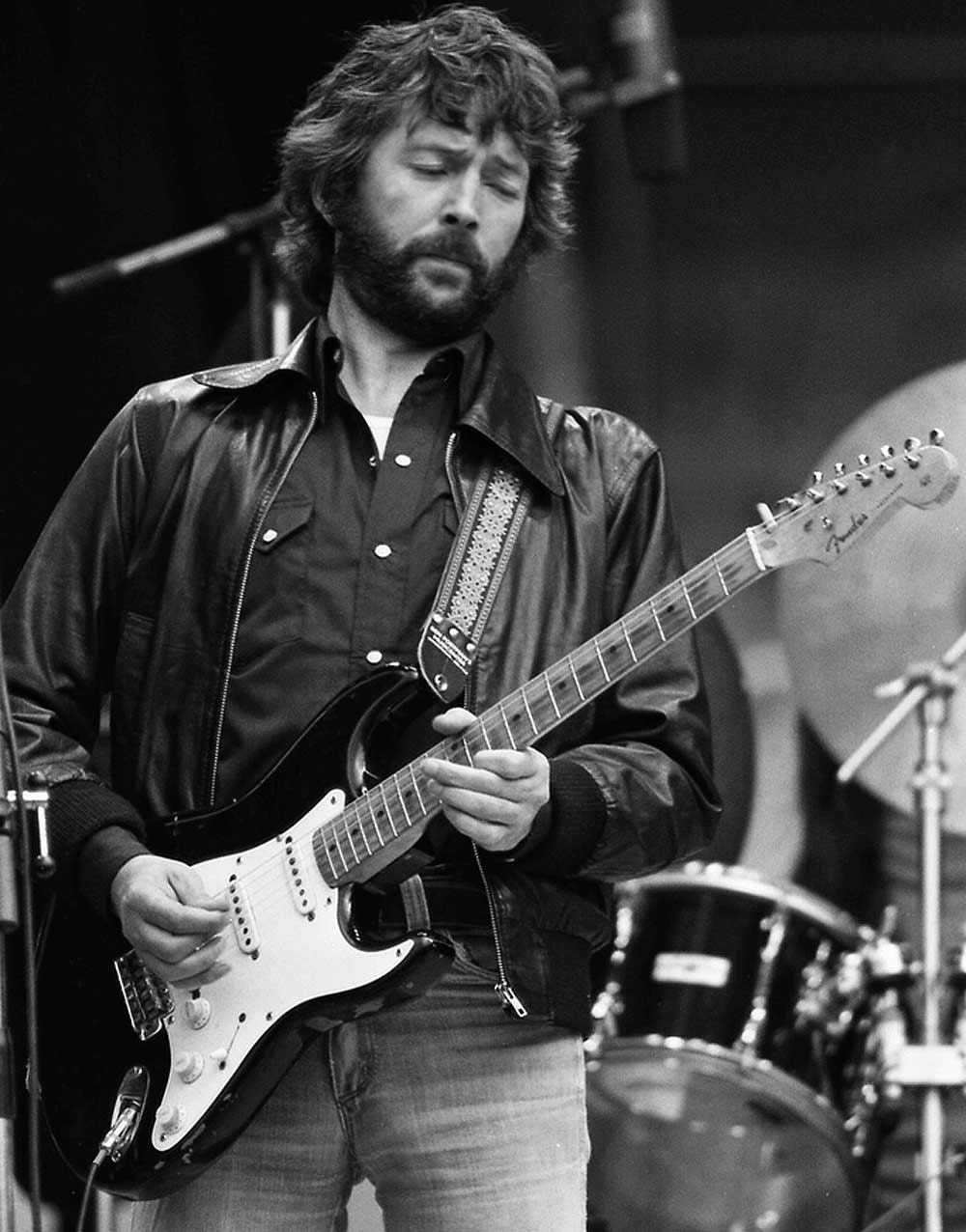 Eric Clapton’s Blackie Guitar was actually a composite of the best parts of three 1950’s Fender Stratocasters assembled into one custom guitar by Nashville luthier Ted Newman Jones in 1970. The hybrid instrument was so named because of its distinctive black finish and first played live by Clapton on 13th January 1973 at the Rainbow Concert in London. This was Eric’s main guitar on stage and in the studio from 1974-1985 and can be heard on the songs Cocaine, I Shot The Sheriff, Wonderful Tonight and several live versions of Layla. Blackie sold for $959,500 at Christies auction house in London on 24th June 2004 and the funds raised went in aid of the Crossroads Centre charity. 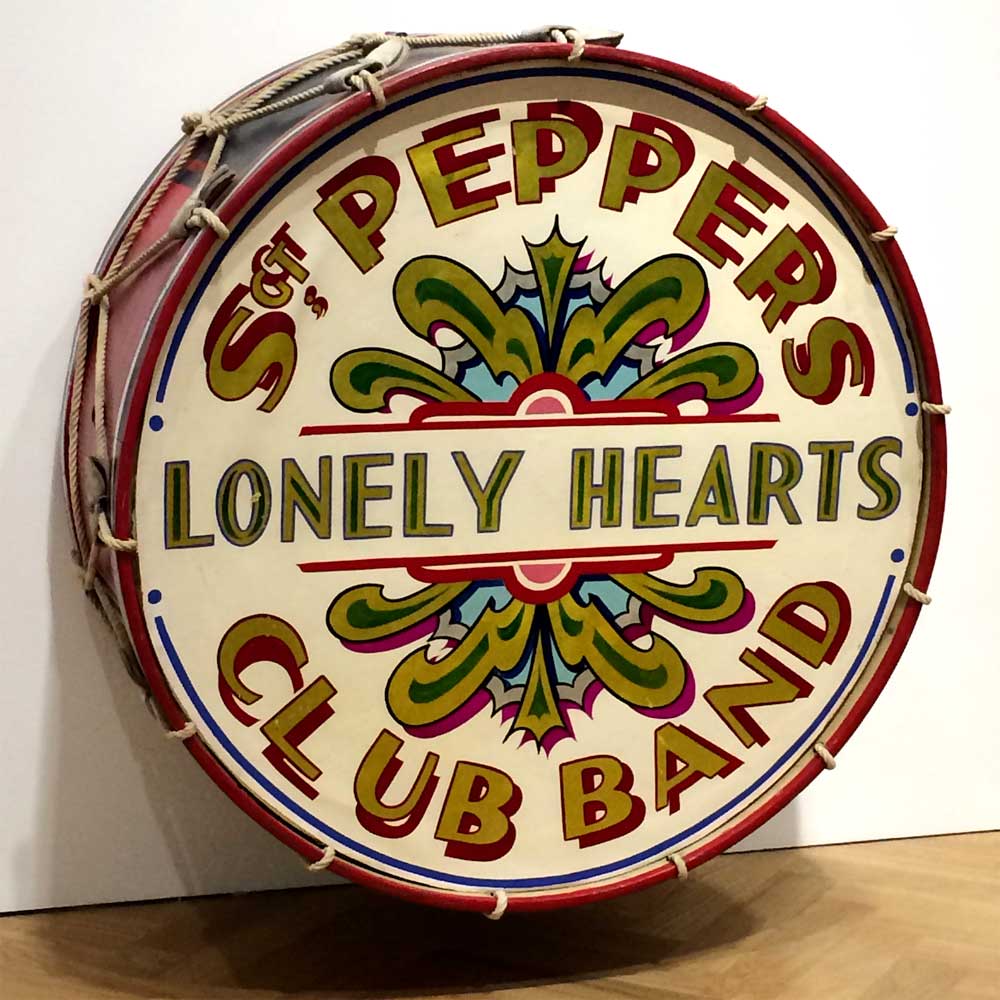 The famous cover for The Beatles’ Sgt Pepper was designed by artist Peter Blake and photographed by Michael Cooper on 30th March 1967. The design for the front of the LP featured The Beatles in costume as Sgt. Pepper’s Lonely Hearts Club Band, standing in front of a life-sized collage of cardboard cut-outs of famous people including musicians, film stars, authors and sport stars. The cost for producing the cover art was nearly £3,000 which was an extravagant sum for the time when album covers would typically cost approximately £50. On 10th July 2008 at Christies auction house in London, the Sgt Pepper Drum Skin sold at auction for $1,070,000.

4. John Lennon’s Handwritten Lyrics for The Beatles A Day in the Life $1.2 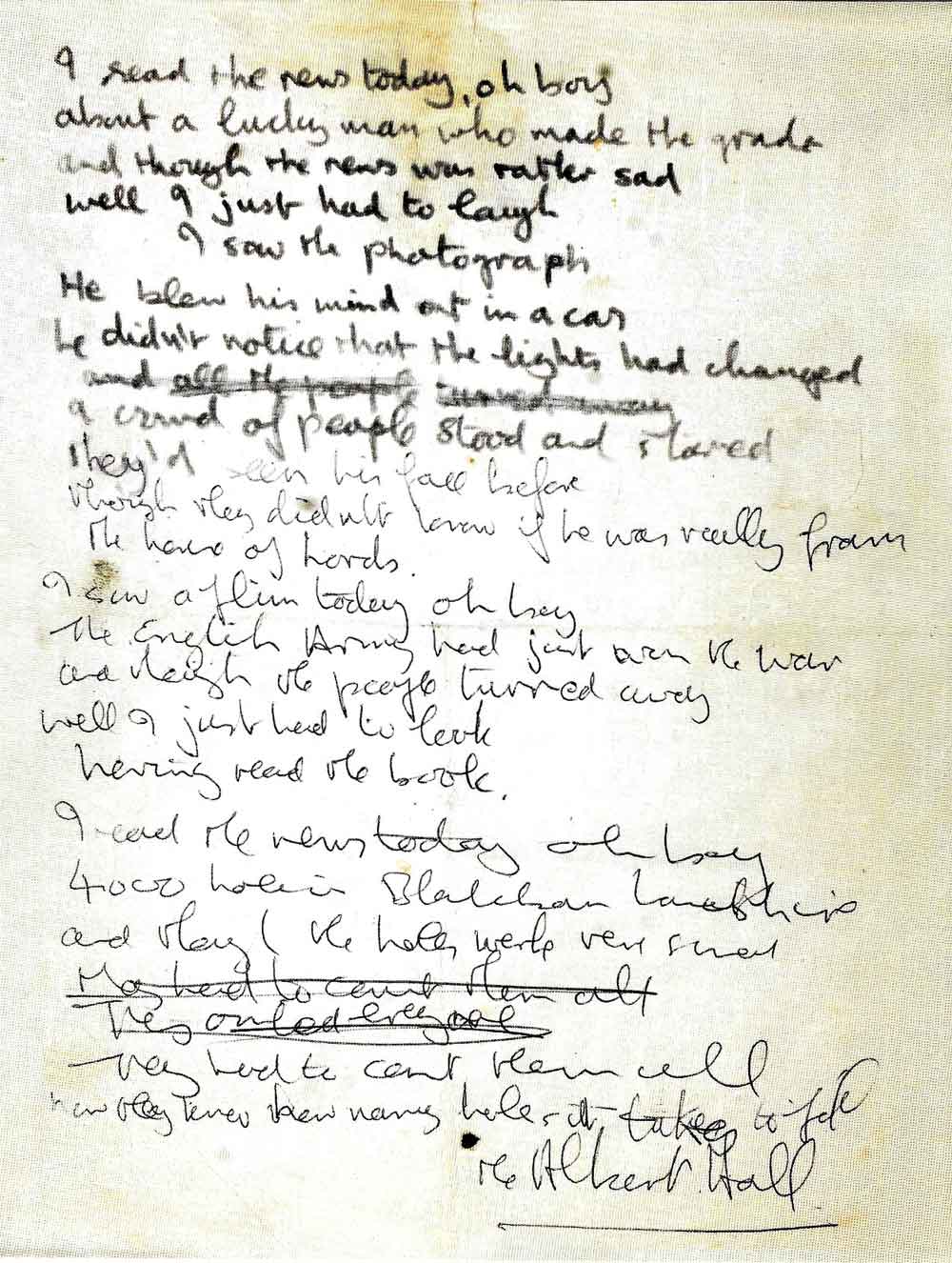 The Beatles released Sgt. Pepper’s Lonely Hearts Club Band in 1967 and the final song was A Day in the Life which was written separately by John Lennon and Paul McCartney. The song’s lyrics are consequently in two segments, Lennon’s are influenced by the current news of the time, while McCartney wrote about his youth and the different segments were linked together with an instrumental section. Rolling Stone Magazine voted A Day in the Life No.1 in their 100 Greatest Beatles Songs chart. In 2010 the handwritten lyrics were auctioned at Sotheby’s in New York for $1.2 million to an anonymous American telephone bidder.

The piano on which John Lennon composed Imagine was sold at auction in 2000 for $2.1 and the buyer was singer George Michael. The piano, a Steinway Model Z upright, was manufactured in Germany and purchased by Lennon in 1970. The the documentary film, Gimme Some Truth: The Making of John Lennon’s Imagine Album from 1971, shows Lennon at the piano keys composing Imagine at his home in England before turning to his keyboard player to remark: “That’s the one I like best.” The instrument was subsequently on display in Liverpool’s Beatles Story museum and also embarked on a charity tour of the US. 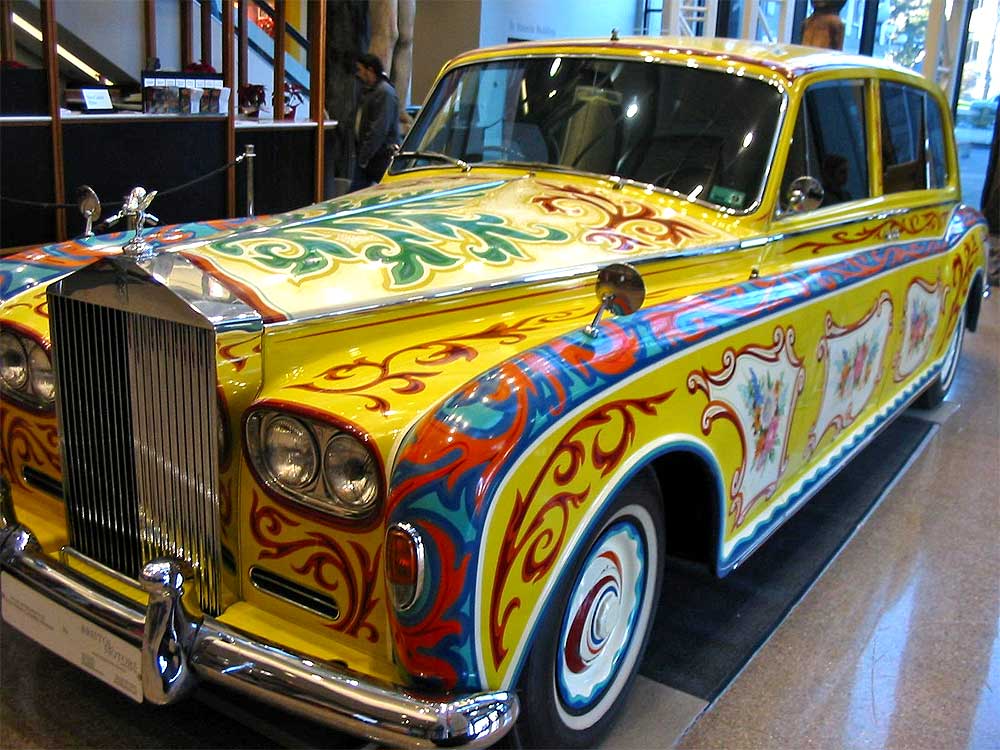 The Beatles film Magical Mystery Tour featured John Lennon’s black Rolls-Royce in a scene where it was painted into “a psychedelic pattern of flowers and swirls”. After the Beatles split up, the psychedelic Rolls-Royce was loaned to many famous rock stars in the 1970s and was eventually sold for $2.3 in 1985 to the Royal British Columbia Museum in Canada. The design for the car was created by artist Steve Weaver at a cost of £290 and painted on Lennon’s Rolls Royce by Weaver at the JP Falon Coachbuilders, England in 1967. 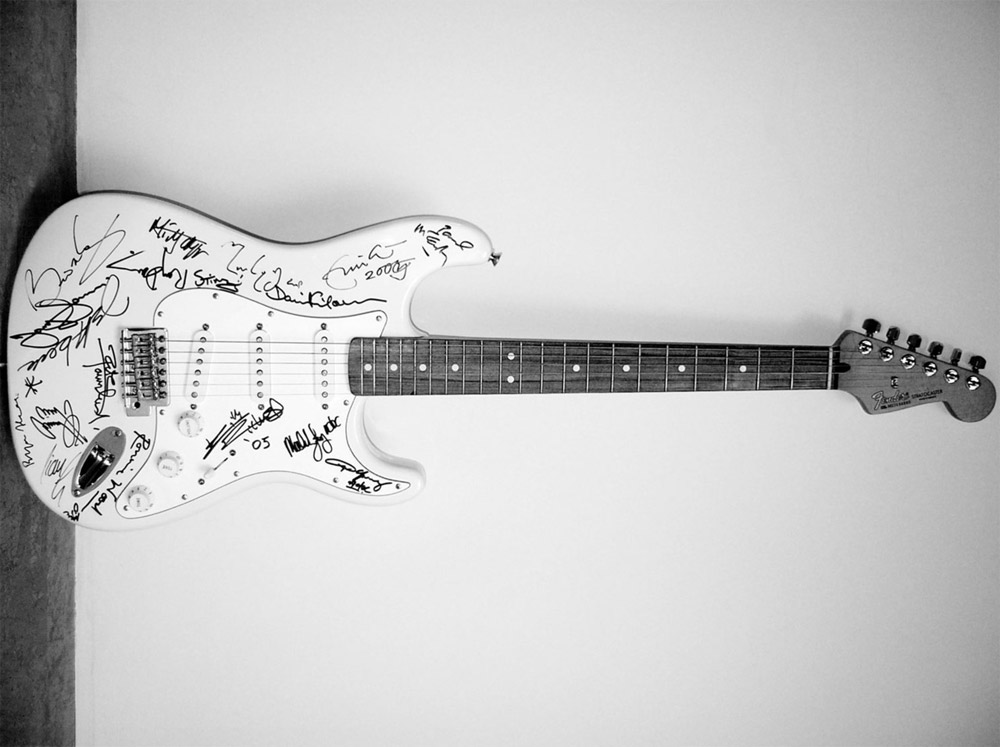 Reach Out To Asia Fender Stratocaster